Samsung wants to leave behind the days when users complained about how late security and Android updates were coming to their phones. After promising 3 years of operating system changes in many of its phones a few weeks ago, now the brand is doubling down by guaranteeing up to 5 years of updates for some of its phones. 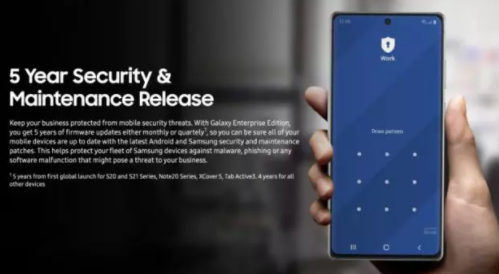 However, there is a catch. Not everyone will be able to access this advantage equally as the devices eligible for the promise of the firm to update their phones for five years only include the business edition of the Galaxy S20 series, the Galaxy S21 series, the Galaxy Note 20 series. , the Galaxy XCover 5 and the Galaxy Tab Active 3. All other business phones will receive four years of security updates, as will all other Samsung devices from 2019 or later.

Samsung indicates that these patches for enterprise devices will be divided into monthly and quarterly updates, and do not include operating system changes.

A clear commitment to business mobiles

Be careful, that although business business telephones are oriented to use in the office, nothing prevents you or any other individual from buying them. The peculiarity of these smartphones is that they have a series of tools through Knox Suite, which allow them to be programmed and managed by companies with their proprietary work software and applications. Added to this are the security options and office applications typical of this type of device.

The good news is that this could not end here since managers of the brand bet that this long period of updates could also reach mobiles that are not part of the “Galaxy Enterprise Edition ” catalog.

The company previously offered four years of security patches for its corporate stock, but it should be noted that the home versions of the Galaxy S6, Galaxy S7 and Galaxy S8 received four years of updates from their launch date.

At the moment there is no more news in this regard but it is to be imagined that Samsung will take advantage of next year’s MWC to announce news regarding its update program just as it has announced this new strategy within the framework of the MWC that is being held right now. In Barcelona, ​​although Samsung, as a brand, is not present in any of the pavilions.